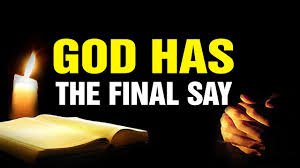 Over time, I have developed a certain approach to watching the game of soccer and other sports which some of my friends find weird, and it is this: I don’t believe in the finality of the scores displayed on the scoreboard until I hear the final whistle. Even if the scoreboard is reading 5-0, with just a minute left to play, I still believe that it is not the final result; within a matter of seconds, that score line can change to 5-1. Until the referee says it is over by blowing the final whistle, I don’t accept that the result is final. And I have carried this attitude to every other aspect of my life; as far as I am concerned, no verdict, no situation, no experience of life – especially a negative experience or verdict – is final until God says so. No matter what anybody says or thinks, as long as that person is not God, I believe it is not final; it can still change.

Today’s reflection shall be centered on the gospel passage and it reveals clearly to us, how God can cancel, reverse, abrogate or nullify any verdict that his mouth has not pronounced. In that text of the gospel, we read of two people who received negative reports – Jairus and the woman who suffered haemorrhage for 12 years. On the one hand, after Jairus had appealed to Jesus to come and heal his sick daughter, he received the report that she was dead; on the other hand, after spending money consistently for 12 years trying to get medical help but without success, the sick woman probably got the negative report that her ailment was incurable. These two people received reports that wore the mask of hopelessness and bore a tone of finality, but to both of them, and to all of us and all humanity for all ages, Jesus proved that no verdict is final and only God has the final say.

A number of things happened with/to the major characters in this gospel passage that are worthy of note. It is important for us to bear them in mind and carry them with us as we approach God. These shall constitute some lessons for us today.

Because Jairus and the woman who suffered haemorrhage believed the words of Jesus, he overturned the reports they had previously received, for he is the one who gives the final verdict. The Bible says no one decrees a thing and it stands but the Lord. It is only God who has the final verdict on everything pertaining to us. There is no human judgment, no human report, no human verdict that God cannot overrule. In the presence of God, no verdict is final! Hence, it does not matter what anyone has said concerning you, it does not matter what verdict the devil and his relatives have passed on you, it does not matter what report that has come to you from any quarters, I announce to you today, child of God, that before God, no verdict is final! With faith in God, negative reports will be reversed; with faith in God, burdens and yokes shall be lifted; with faith in God, curses and chains shall be broken; with faith in God, injustices shall be corrected; with faith in God, every verdict is reversible. Choose therefore, this day, whose report, whose verdict you shall believe. There is a God who has the final say, the final verdict, and that God is calling on us today to have faith in him, to walk uprightly before him, to humble ourselves before his mighty power, and he will do great and wonderful things in our lives. I pray for you today, that as we begin a new day, a new week, and end the first half of this year to begin the second half of the year, may God overrule and overturn every negative verdict that has been pronounced about you and upon you in the mighty name of Jesus! Amen!

LORD OF THE STORM (12TH SUNDAY IN ORDINARY TIME, YEAR B)

A MESSAGE FOR THE SHEPHERDS (HOMILY FOR 16TH SUNDAY, YEAR B)
Scroll to top