The Catholic Archbishop of Abuja, John Cardinal Onaiyekan has described education as the most essential tool for the development of any nation and its people, noting that no amount of investment in it is a waste. The Cardinal made this assertion in his address at the recent celebration of the 10th anniversary and sixth convocation ceremony of the Veritas University, Abuja, (The Catholic University of Nigeria), Bwari, Abuja.

Cardinal Onaiyekan who is the Chancellor of the University declared: “… education remains the royal pathway to and fro personal and national development. No amount of investment in education is a waste. We must continue to invest in education as students, parents, communities, organizations and governments.”

The Chancellor expressed gratitude to his brother bishops for their immeasurable support for the growth of the institution, in spite of other competing demands which as bishops they face in their various Archdioceses and dioceses. He also expressed his gratitude to other stakeholders who have facilitated the steady growth of the university in its ten years of existence. He declared: “… the mustard seed we sowed some few years back is before our eyes becoming a big tree providing intellectual shade and sanctuary for many”.

Noting that the vision and mission of the Bishops for establishing the university is gradually yielding the desired fruits, Cardinal Onaiyekan commended the University’s community for their relentless efforts at helping the bishop-owners realize the desired objectives and taking the institution to a very high pedestal particularly in its academic programmes; in spite of identified challenges. His words: “This is a good occasion to salute the tenacity of the entire University Community, especially those who have been with the University through thick and thin.”

Addressing the graduands, Cardinal Onaiyekan while congratulating them charged them to be good ambassadors of their alma mater urging them to make their mark in the growth and development of the society with the knowledge, skills and attitudes which they have acquired during their training in the university. He urged them to be veritable agents of positive change and transformation in the country, because “they have been properly educated, informed and formed”.

The Catholic Archbishop of Abuja Archdiocese appreciated other stake holders who have supported the Bishops Conference in realizing the successes achieved so far by the institution and commended the government and its various agencies for “opening valuable channels of partnership”. He noted that: “Such collaboration between the Church and the State cannot but be for the mutual interest of both parties, the good of our people all to the greater glory of God”.

In his own address, the Vice Chancellor of the University, Professor Michael Kwanashie expressed concern about the poor funding of tertiary institutions in the country and called on government to invest more in the sector. He remarked that with the increase of universities in the country from 50 to 150, the government must also facilitate human capacity for effective delivery by these institutions.

Noting that the country’s university system experiences inadequate funding, Professor Kanashie pointed out that it is generally believed that government is not investing enough on university education and advocated a reversal of the situation. The Vice Chancellor remarked that education is a very expensive business and enormous resources is required to equip tertiary institutions.

Speaking on the efforts of the University, the Vice Chancellor declared: “At Veritas, we are doing our best to produce standard quality of thoroughly-bred graduates”. At the convocation ceremony, about 103 students were graduated with 11 of them in the First Class Honours.

The ceremony was attended by dignitaries from all walks of life, including some members of the Catholic Bishops Conference of Nigeria, the academia and members of family of the graduating students. 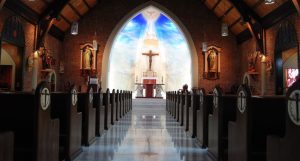 VUNA GRADUATES URGED TO BE AGENTS OF CHANGE IN THE SOCIETY

2ND SUNDAY OF ADVENT, YEAR B
Scroll to top